Shooting the Breeze with Jug Suraiya 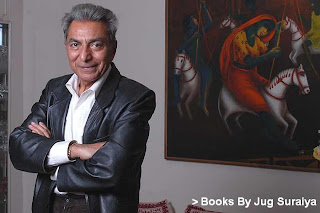 I’ve just finished reading Jeffery Archer’s anthology of collected short stories. The book I love above all others is Jerome K Jerome’s Three Men in a Boat.
11. Which is your most disliked book of all that should have never seen the inside of a publishing house?
A book that should never have been published? There is no such thing. All books – no matter how good or bad individual people think them to be – deserve to be published.
12. Do you enjoy reading and still read  as you did when you began your journalistic career forty threes ago? Whats stayed the same and whats changed?
Yes, I still red as much, if not more, now than when I started my career. What’s changed since then? There’s a lot more reading matter available now than before. So much for prediction that the reading/writing habit is dying out.
13. In your book you write about how by the yardstick of the world events and you not knowing what an ipone is, you haven’t changed much. But to survive and flourish in a carrer for forthy threes is no mean feat and that’s involves adaptation. How have you adapted to the changing times?
How have I adapted to changing times? I suppose by being a survivor – like the cockroach, which has been around for a million years.
14. Do you now know what an iphone is? Do you know how to  sms?
No, I haven’t the faintest idea of what an iPhone is. Is it the opposite of a youPhone? I don’t like SMSing. It gives me a sore right thumb.
15. Your journalistic memoir, in the foreground has your journey as jug the writer, witty poignant, sharp but never vitriolic and fairly respectful In the background, a portrait of a genteel manIs etched. A man who feels deeply for the environment and the underdog. A man whose love for brindle suraiya gave her, her own chapter, posthumously. Reading your work is like meeting after an acquaintance after very long who, by the end of the book is much the like the dear friend one never knew they had. A friend who understands your pathos, troubles, happiness and general state of affairs. We cant let you at just this. Now we want to know you, sympathise with your troubles and laught with you at your triumphs or attempted move at impersonating yet another maharaja. When can we now get to know Jug Suriya for Jug Suraiya? A memoir is in the offing… yes??
Is a memoir in the offing? I thought this book was a memoir. Will I do a more personal autobiography, outside my journalistic experiences? Maybe, if I feel there’s a readership for it. Is there? That’s not for me to say. That’s for my readers to say. So, all you wonderful folk out there: Do you really want another Jug Suraiya Story…?