The Secret of Nagas by Amish Tripathi at Brink of History 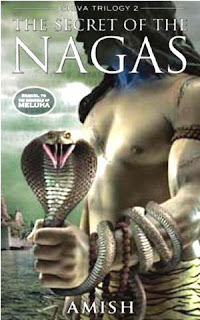 The Immortals of Meluha is story of a place in the imaginary land of Meluha and how they are saved from their wars by a nomad named Shiva. Continuing the thrill in The Secret of Nagas, Shiva, the Tibetan immigrant who is the prophesied destroyer of evil, will not rest till he finds his demonic adversary. His vengeance and the path to evil will lead him to the door of the Nagas, the serpent people.


Amish Tripathi is a 36 year old boring banker turned happy author. Not to be missed, he has an IIM Degree silently watching his creative pursuits taking remarkable flights. The success of his debut book, The Immortals of Meluha, first book of the Shiva Trilogy, propelled him to give up a fourteen-year-old career in financial services for writing. Today, Amish lives in Mumbai with his wife Preeti and son Neel.

“The Immortals of Meluha was amazing & mesmerizing, the author has an amazing connect with shiva which he depicts in the book. Its magical! Badly waiting for Book 2 to release, my brother has already preordered it for me at Indiaplaza.com. I also watched the trailer of The Secret of the Nagas, and just got goose bumps after watching it. Har Har mahadev” reviewed James, one of the followers of The Secrets of Nagas at Indiaplaza.com


Well the wait is almost over now, you can go ahead and order your copy of The Secret of Nagas at Indiaplaza.com and you will get it in just three days.